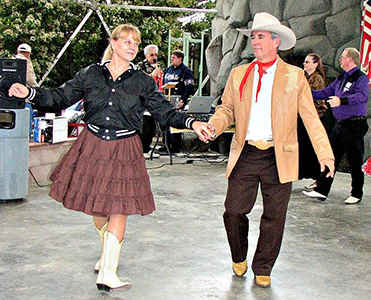 On August 11, 1957 eight couples decided that square dancing was an ideal way to spend an evening of good clean fun. The first hall used for dancing was the Four Oaks Grange on Bailey Hill Road where the club danced for several years. They elected Newton Roark as their first president, and decided that dues would be $1.00 per couple per month and dancing was 50 cents per couple per night. By 1958, membership increased to 14 couples and dues were increased to $2.00 per couple. Lyman Windheim was the first club caller and this group called themselves the Belles and Beaus.

In October 1959 the club reorganized and a constitution was drawn up and the name was changed to Whirl-A-Ways. The club pin was designed and made by the members of seasoned Rhododendron wood with the club name, member’s name, city and state printed on by wood burning.

Eighteen new couples formed the first class, taught by Lyman Windheim and wife Ann. Lyman stayed with us until September 1963, when he felt he should devote more time to his business. Ivan Koehn came to call for the club at this time.

Several special dances are held throughout the year and a picnic and campout are planned for each summer. Years ago an annual Night Owl Dance was held the fourth Saturday in June, drawing dancers from all the area clubs, with breakfast served at 1:30 a.m. and then more dancing until 3 a.m. or so. The Night Owl dance was discontinued some time in the mid-1970s. In the late 1990s we had many activities including campouts, Pie and Ice Cream Social, Progressive dinner, mystery trip, campouts, and visitations to other clubs.

The Whirl-A-Ways started dancing in a barn owned by the Baumans. We have also danced at Ward Hall on Second Avenue 1963-67, Westmoreland Community Center 1967-80, Gerlinger Hall on the UO campus 1980-82, Santa Clara Grange 1982-2003, and since April 2003 at the Square Dance Center in Springfield. When the club moved from Gerlinger Hall we danced briefly at the Lorane Grange and a building on Olive St. near 13th Avenue. All these places were in the Eugene area.

In November 1992, when the club celebrated its 35th birthday, the Whirl-A-Ways had 120 active members. In September 2000 we had 115 members enjoying the fun, recreation, sociability, and friendship of our club.

In April 2003 the club moved from the Santa Clara Grange to the Emerald Square Dance Center in Springfield.

Ivan Koehn retired as caller in June 2007 after about 44 years of calling for the club. That September we celebrated 50 years of dancing with a special dance in September.

Then in January 2008 we hired Bob Ewing as our caller; he called his first club dance our the Whirl-A-Ways in April 2008. Bob resigned as our caller in June 2013.

Christina Corelli and Sharon Greenman have alternated as our round dance cuers for many years. Sharon retired from cuing in June 2014 and Christina assumed cuing for both of our dances.

We hired Mike Kious as our caller in the summer of 2013; he called his first dance for us in September of that year.

At the beginning of 2018 we have approximately 90 members. Most are active in dancing and take part in many other activities we enjoy as a club. We have several former members who are no longer dancing, but still occasionally attend club functions.